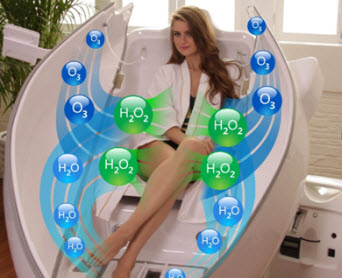 Ozone therapy is a form of alternative treatment that increases the amount of oxygen in the body through the introduction of ozone.

The use of a sauna should be an important part of any detoxification program. The sauna increases the elimination, detoxifying and cleansing capacity of the skin by stimulation of the sweat glands and also promotes healthy skin tone and texture due to increased blood circulation. Using the steam sauna with ozone allows the steam to surround the body and ozone can be introduced through the skin. Humid heat opens the pores, which allows the ozone through the skin to the bloodstream, where it can travel to the fat and lymph tissue. It is very important to cleanse the lymph tissue of toxins and the ozone/steam sauna is the easiest and best way to accomplish this.

In a 1959 review of studies on the effects of heat treatments, Mayo Clinic researcher Dr. Wakim and colleagues cite findings indicating that the number of white blood cells in the blood increased by an average of 58% during artificially induced fever. The generation of antibodies speeds up, as does the production of naturally produced anti viral protein that also has powerful cancer-fighting properties. However with the addition of ozone the effects are vastly more powerful.

Trans-dermal ozone also has a very relaxing effect. This is partly because heat has a naturally relaxing effect and partly because ozone oxidises (i.e. breaks down) excess adrenaline in the body, producing overall calm.
This method is also useful for skin complaints and improving the tone of the skin generally. We find that eczema and psoriasis sufferers benefit enormously from this therapy.

Here’s How Ozone Delivers These Benefits…

When a cell becomes stressed by physical or chemical shock or by viral, bacterial or fungal attack, its energy levels are reduced by the outflow of electrons and it becomes electropositive. Ozone possesses the third atom of oxygen which is electrophilic. In other words, ozone has a free radical electrical charge in the third atom of oxygen which seeks to balance itself electrically with other material with a corresponding unbalanced charge. Diseased cells, viruses, harmful bacteria and other pathogens carry such a charge and so attract ozone and its by-products.

When ozone is introduced into the blood, it reacts with these oxidizable substrates killing viruses, bacteria and fungi. Ozone disrupts the integrity of bacterial cell envelope through oxidation of the phospholipids and lipoproteins. It also damages viral capsid and upsets reproductive cycle by disrupting virus-to-cell contact with peroxidation.

In addition, the metabolic waste products of these organisms are oxidized and an oxygen rich environment is provided which healthy cells can thrive. Normal healthy cells can not react with ozone or its by-products as they possess a balanced electrical charge and strong enzyme system. Ozone targets only diseased cells and pathogens.

Trans-dermal ozone therapy also assists in weight loss. During a 20-40 minute session in the steam cabinet the body burns up to 250-500 calories. More importantly as toxins are stored in the body’s fat reserves, when the body is de-toxified as a combined result of the sweating inside the steam cabinet and the de-toxification that takes place as a result of the ozone, the body no longer requires extraneous fat and so you are more likely to stay slim.

Excellent for treatment against Autoimmune diseases and fighting cancer.